We seem to live in a world of ever increasing health challenges, many of which were relatively uncommon or indeed, unheard of just 25 – 30 years ago. For example the levels of asthma in children are dramatically increasing, the same is happening with diabetes type 1 in children under the age of 7 as well as other auto-immune disorders, such as severe multiple allergies, childhood cancer, autism, ADHD, ASD, and the list goes on. 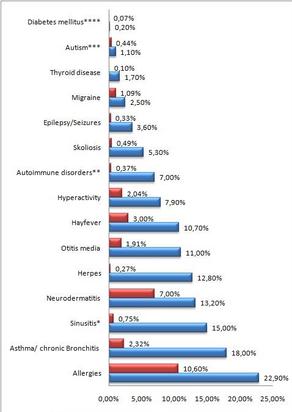 Theories are abound for the development of these often serious and life-long health problems. For example we’re told that children are too clean these days, don’t get dirty and muddy to enable them to build natural immunity, or that their homes are over cleaned with chemicals and biocides, whilst their diet is poor, full of sugar, unhealthy fats, and often lacking in the necessary nutrients that a healthy body needs.

It is also common practice to unquestionably trust the medical profession in matters of health. Right from birth we are modelled into trusting healthcare staff and relying on the information they provide us in matters of medical care. This includes diagnostics, prescription drugs, disease prevention and health promotion, vaccinations, and more.

But what if there was a causative factor that could account for the majority of these increasing childhood health problems? One factor that is present and affects 90 – 95 % of all populations? Yes, you guessed it, I am referring to vaccinations.

In fact we are repeatedly told by health care professionals that vaccines are safe and effective.
However, there is also much concern that this may not be so, and many doctors are now speaking out too, alongside parents and alternative health specialists.

Dr Suzanne Humphries states: “The claim that ‘the vaccine science is settled’ is a factually, intellectually, and morally dishonest attempt to silence debate and discussion about the evidence and science in the medical literature, which speaks against the mainstream mantras.” (2)

We also know of so many past medical scandals that could, and should have been avoided. One example is the drug Thalidomide that had such catastrophic consequences for people around the world. Even smoking! For a very long time we were told that smoking was safe, in fact it was often promoted by doctors in advertising, and yet it has emerged that scientists already knew in the 1940’s that smoking caused lung cancer, but suppressed this information. So, why should we believe that vaccines are safe and effective?

It is common knowledge that students at Medical and Nursing Schools receive very little or no education on the ‘science’ of vaccinations, including safety issues and effectiveness.

Not only this, but recently the Editor of the trusted British medical journal ‘The Lancet’ stated that almost half of all medical scientific research is false (4)

So, we live in a society where the majority of the population trusts the medical profession, and where the pharmaceutical companies fund a good deal of medical research, almost half of which seems to be false, and our mainstream national media appears uninterested in analysing and debating concerns about the safety and effectiveness of vaccinations.

One way of settling this argument would be to undertake long-term surveys comparing the health of vaccinated and unvaccinated children. Alas, there appears to be a lack in interest in doing so.

Quoting Dr Humphries again, she says:
“There is a paucity of studies comparing never vaccinated children, with partially or fully vaccinated children. In 2017 two important articles were released regarding vaccinated and unvaccinated homeschooled children. The results should make any thoughtful scientist step back and ask exactly what vaccines are achieving.” (5)

Another study found that vaccinated children have a 420% higher risk of Attention Deficit Hyperactivity Disorder (ADHD) compared to non-vaccinated children. I don’t know about you, but after reading this paper, I would be seriously questioning the benefits versus the potential risks of vaccinating. (6)

It’s not just Autism and ADHD. Below, is a graph comparing the incidence of several illnesses occurring in both vaccinated and unvaccinated children. I don’t know about you, but looking at this chart, I would feel tempted to demand more research to establish what exactly is going on. (7)

Read More on This Article

An 1992, the Immunization Awareness Society (IAS), which is now known as wavesnz.org.nz, conducted a survey to examine the vaccination status and health of New Zealand’s children. The results indicated that unvaccinated children were far healthier than vaccinated children. (8)

One question that needs addressing urgently is that of the added ingredients to vaccines, specially Thimerasol, Aluminium, and more recently the addition of Polysorbate 80 – this chemical opens the blood-brain barrier, thus allowing toxic metals to cross into the brain.

Bearing in mind that the levels of aluminium used in vaccines far exceed the safe levels allowed, do we know how this aluminium is affecting a small baby’s brain?
For example a 6 kg baby at two months of age receives 1,225mcg of aluminum from their vaccine schedule – 50 times the safety levels. (8)

Another effort to discount vaccinations in autism has gone into research to prove defective genes as the major culprit. Some epidemiological studies based on twins with autism spectrum disorders was done as early as the mid-1970s. Since then, autism has increased 40-fold. All this from a sudden case of bad genes? This rapid autism rise has coincided with a dramatic increase of early childhood vaccination schedules over the same period, which has been an almost four-fold increase. (9)

Some people would argue that the availability of social media plays a part in the dissemination of news, or that diagnostics are more accurate. But is this all due to social media, or better diagnostics? We hardly see some of these topics discussed in the mainstream media, specially what might be the causation(s). We could probably agree that several causative factors could be responsible.

Are we walking a tightrope whilst blindfolded?